Christmas Wouldn’t Be Christmas Without The Nutcracker

The Nutcracker is a 2-act ballet, originally choreographed by Marius Petipa and Lev Ivanov, which is based on the story “The Nutcracker and the King of Mice” written by E.T.A. Hoffman.  Although what is seen on the stage today is different in detail from the original story, the basic plot remains the same; The story of a young German girl who dreams of a Nutcracker Prince and a fierce battle against a Mouse King with seven heads!

The music of the Nutcracker Ballet was composed by Peter Ilyich Tchaikovsky in 1892.  Petipa and Tchaikovsky had previously successfully collaborated on The Sleeping Beauty.  The 1892 premiere of The Nutcracker failed with both the public and critics. Unfortunately, Tchaikovsky never knew what a huge success the ballet became, as he died less than a year later.

Tchaikovsky’s score has become one of his most famous compositions, in particular the pieces featured in the suite.  Among other things, the score is noted for its use of the celesta, in the “Dance of The Sugar Plum Fairy”.  The sound of the celesta is similar to that of the glockenspiel but with a much softer and more subtle timbre. This quality gave the instrument its name, celeste meaning “heavenly” in French.

The Sugar Plum Fairy is considered by many to be the most sought-after role in the Nutcracker Ballet. The ballet dancer chosen as the Sugar Plum Fairy dances a Pas de Deux with her cavalier (Prince), a dance now famous throughout the world. 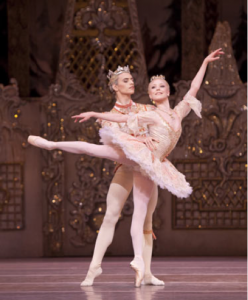 The Nutcracker is celebrated internationally during the festive season.  Most ballet companies perform their own version of The Nutcracker sometime during the month of December, making it one of the most popular ballets and a major part of the Christmas tradition.

So if any of your young ‘Sugar Plum Fairies’ are feeling inspired and in need of a new tutu, or any other supplies, please visit us at Dancewear Universe.